The windows in the St. Alban's nave have been called "sermons in glass." Created by German artist Ernst Jans-Wilkeln and installed in the 1950s, their modern, non-representational images form a striking juxtaposition with the gothic architecture of the church. Worshipers have found these unique windows sublime, powerful, comtemplative, and inviting. The main windows in the nave are described below. Additional windows (showing the Blessed Virgin Mary greeting St. Elizabeth; Jesus' encounter with Mary and Martha; St. Alban's Sword; and the Seal of the Episcopal Diocese of Texas) can be found in the Sacristy and Vesting Room. In addition, the Agnus Dei (Lamb of God) Rose Window above the Altar replaced the original fabric reredos in 1996. Crafted by Waco artist Bryant Stanton, the window depicts the Lamb of God (in a field of Texas Blue Bonnets), surrounded by instruments of praise. 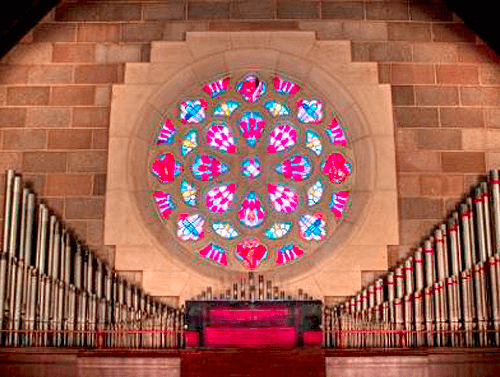 The four sections of the St. Alban’s rose window depict images of the four gospels: Matthew, Mark, Luke, and John. A winged creature with the face of a man at the top of the window represents Matthew who begins his gospel by voicing the human descent of our Lord. At the bottom of the window is the winged creature with the head of an ox, the animal of sacrifice, because he gives a full account of the sacrifice of Jesus.  At the right, a winged lion represents Mark whose gospel begins with, “the voice of one crying in the wilderness.”  This proclamation suggests the mighty roar of a lion.  The eagle at the left represents John, because that gospel soars as on eagle’s wings to the very throne of heaven. 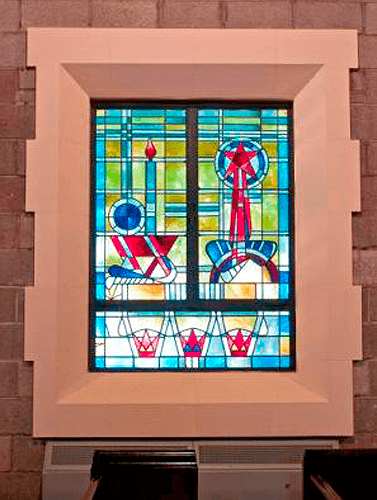 The Nativity and Epiphany

This window depicts the beautiful opening to John’s gospel: “And the Word became flesh and lived among us and we have seen his glory, the glory as of a father’s only son, full of grace and truth” (John 1:14). The crib speaks to us of God’s humble birth in a manger at Bethlehem. The candle reminds us of Jesus’ words, “I am the light of the world. Whoever follows me will never walk in darkness but will have the light of life” (John 8:12).  The cross above the crib serves as a reminder that this child will die on a cross. The star in the right panel recalls the star that guided the wise men, who are represented by the three crowns in the bottom panel. 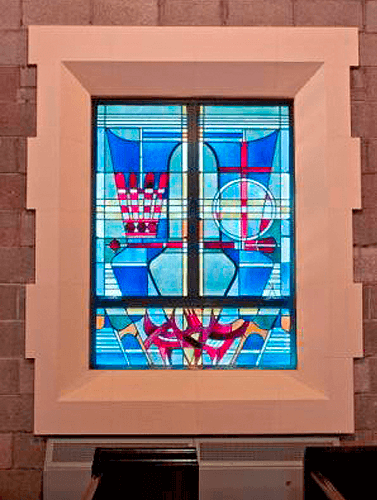 Symbols of royalty in this window speak of Christ as the King of Glory.  The most noticeable symbol, the crown, appears in the left panel. While representing the Lord’s kingship over all creation, it also echoes the words of James 1:12: “Blessed is anyone who endures temptation. Such a one has stood the test and will receive the crown life that the Lord has promised to those who love him.”  Another crown, one made of thorns, appears in the bottom panel to remind us of Jesus’ suffering. Below the crown, extending though the left and right panels, is the scepter,  which again serves as a representation of royal authority. Above the scepter in the right panel is the cross from which our Lord reigned as King. The cross rises from a circle, symbolic of eternity. 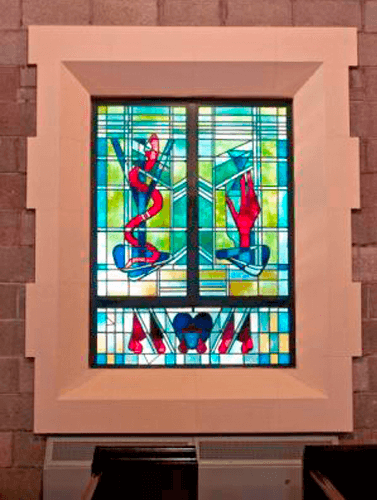 This window emphasizes Christ’s healing of all people. A serpent in Christian symbolism, such as the one in the left panel of this window, reminds us of more than the serpent in the Garden of Eden.  The image in this window calls to mind one of the stories about Moses with the Israelites in the wilderness.  In this story, the serpent was a sign of God’s will to forgive and heal (Numbers 22:4-9). The healing hand of Christ is pictured in the right panel, lifted in a blessing over a flask that contains oil for healing. The five bleeding wounds of Jesus are pictured in the bottom panel. These wounds at the crucifixion bring true healing and wholeness to all people.

This window symbolizes Holy Baptism. The apple in the bottom panel calls to mind the story of Adam and Even eating from the tree of the knowledge of good and evil in Genesis 3. Coming to meet our sin is the hand of God, reaching out to help us even though we continually fall short of God’s glory. The fish, in the upper left panel, is a very ancient symbol for Christ. The dove symbolizes the Holy Spirit who came upon Jesus in the form of a dove at his baptism. In baptism, we are united with Christ through the church in the power of the Holy Spirit. 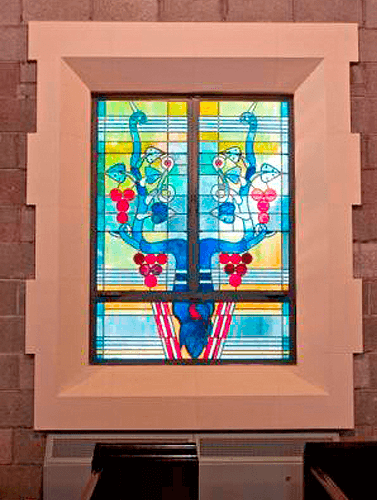 Christ The Body Of The Church

Jesus says, “I am the vine, you are the branches. Those who abide in me and I in them bear much fruit, because apart from me you can do nothing” (John 15:5). The Lamb of God appears in the bottom panel as the source of life for all the branches. The grapes in this window call to mind the wine of the Holy Eucharist, for it is through that meal that we have new life in Christ. 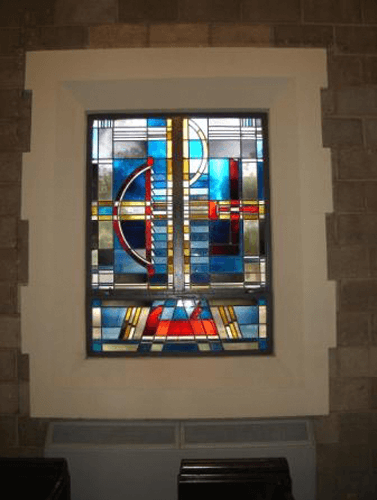 The array of carpentry tools pictured here symbolize Jesus’ humanity. In the left panel is the saw, in the right the protractor, ruler, square and hammer, and in the bottom panel the block plane. These are arranged to suggest the Chi Ro, the traditional symbol for Christ from the first two letters in the Greek word for Christ, Christos. 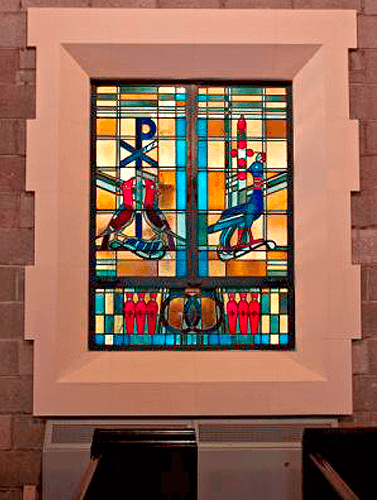 The Family Under Christ

This window is symbolic of Christian marriage. Six jars appear in the bottom panel as a reminder of the first miracle Jesus performed at a wedding in Cana of Galilee. The two circles in the center of the window are symbolic of wedding rings. In the left panel, a pair of doves represent two people in marriage, placed under the protection of a Chi Rho, an ancient symbol for Christ. In the right panel, a pheasant representing all humanity is basking in the light of Christ. 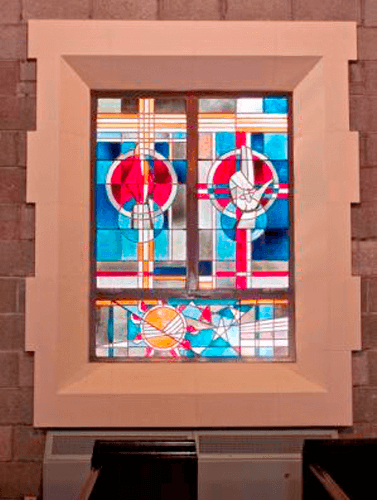 The window represents Jesus as the great teacher. The burning candle in the left panel calls to mind Jesus’ words, “I am the light of the world.” (Jn. 8:12) The hand in the right panel is a symbol of God, the creator of heaven and earth. Taken together, these images remind us to continue learning about God and God’s works so that we can abide in the light of Christ. 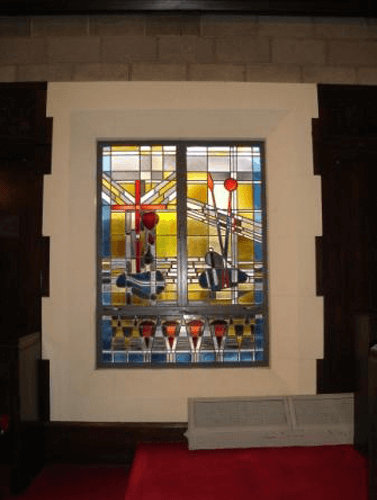 The symbols in this window are the instruments of Jesus’ crucifixion. The cross appears in the left panel with a broken and bleeding heart.  The bottom panel shows the nails which pierced Jesus’ hands and feet. The right panel shows a spear and sponge. Soldiers offered Jesus vinegar from a sponge for his thirst and they pierced his side with a spear after he had died. 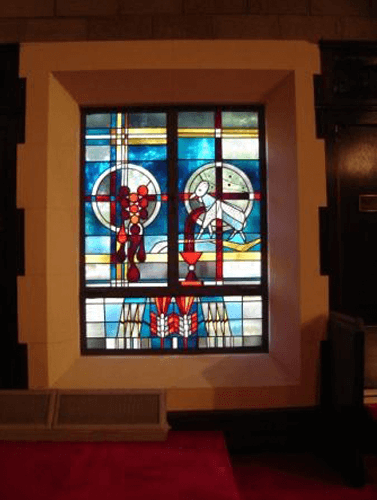 The Holy Eucharist, the meal that we share on Sundays to celebrate Jesus’s death and resurrection, is symbolized in this window.  The Lamb of God, Jesus, is being sacrificed and poured out.  The blood of the Lamb is flowing into a chalice.  This image reinforces the words that are said when we receive communion: “The blood of Christ, the cup of salvation.” This image of sacrifice is surrounded by the circle, which symbolizes our eternal life that flows from the Lamb of God. 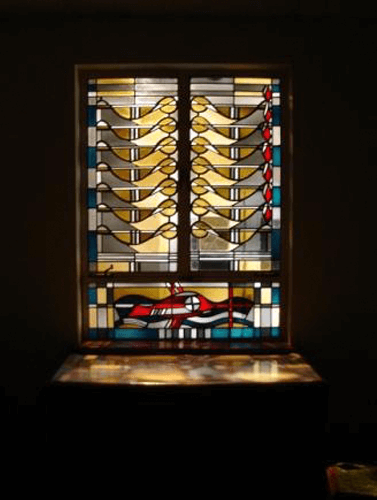 This stained glass window, which depicts the book of Revelation, stands behind the altar in the Higgins Chapel.  Seven burning lamps appear in the upper panels.  In Revelation, these lamps represent the churches throughout the ancient world (Revelation 1:20). The lower panel depicts a great fish beneath the waves of the sea. This image is symbolic of the universal song of praise that bursts forth in praise of the risen Lord: “Every creature in heaven and on earth and under the earth and in the sea, and all that is in them” sings to the Lamb on the throne (Revelation 5:13).