Established with the goal of bringing world-class music and performers to Saint Alban's and the city of Waco, the Sacred Arts Series will celebrate the exceptional musical legacy of the church with monthly concerts and liturgies.

The Sacred Arts Series is self-funding and thus operate outside the scope of the regular music budget. All donors will receive acknowledgement in concert programs. The giving levels are as follows:

Please contact the Director of Music, Eugene Lavery for further information at (254) 752-7843 or eugene@stalbanswaco.org

Checks can be made out to Saint Alban's Episcopal Church with Sacred Arts Fund in the memo line. 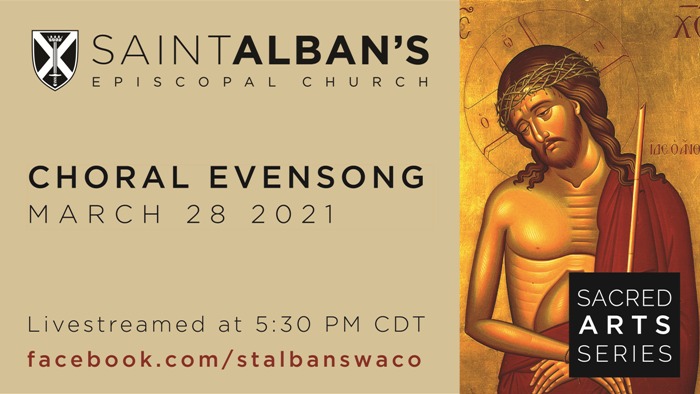 Join St. Alban's on Sunday, March 28, at 5:30 PM on Facebook Live and YouTube for a live-streamed service of Choral Evensong for the beginning of Holy Week. 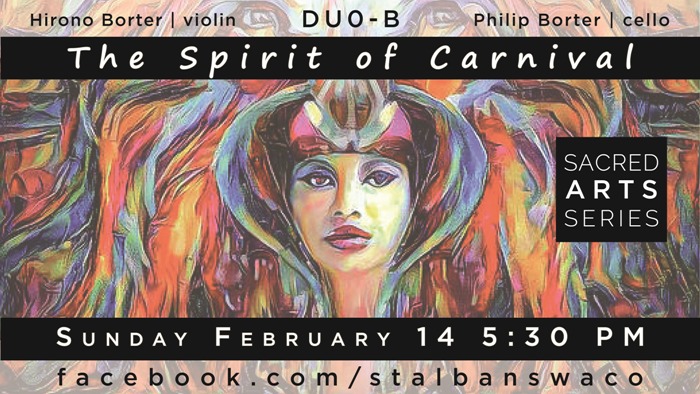 The St. Alban’s Sacred Arts Series continues on Sunday, February 14 at 5:30 PM with Duo-B (Hirono Borter, violin; Philip Borter, cello) presenting The Spirit of Carnival, a concert featuring music from South America. This concert will be broadcast live and on-demand on Facebook Live and YouTube.

Unique in the classical music world due to their dedication to works for violin and cello ensemble, Duo-B is quickly earning praise for their passionate musical commitment, creative style, and original programming. The ensemble began in 2009 with the chance meeting of a Japanese violinist and an American cellist in Germany, at the Hochschule für Musik-Freiburg. Their fascination with travel, innovative styles of music-making, and each other soon led them down creative and unexpected paths that later resulted in the forming of Duo-B, while still graduate students at the Eastman School of Music. Early on, a diversion from their classical training has led them to explore music from a variety of genres and cultures, including folk traditions of Europe, Appalachia, and Japan. In addition to performing rarely heard classical masterpieces alongside lesser-known works, including their own original arrangements and compositions, a great emphasis is placed on the communicative power and remarkable intimacy found in the string duo. 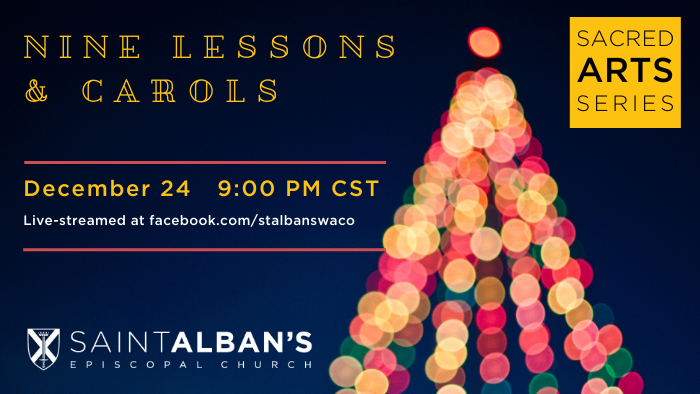 Worship online this Christmas Eve with St. Alban's at 9:00 PM on Facebook Live and YouTube. The much-loved service of Nine Lessons and Carols consists of nine short bible readings which tell the story of the fall of humanity, the promise of the Messiah, and the birth of Jesus, interspersed with carols and hymns sung by the Chamber Choir and Choristers of St. Alban's. 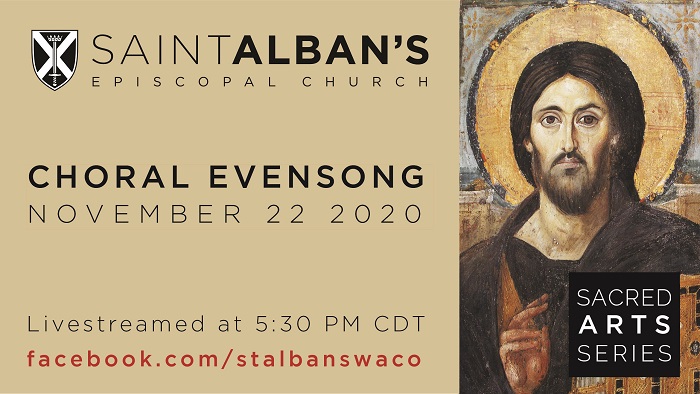 Join St. Alban's on Sunday, November 22, at 5:30 PM on Facebook Live and YouTube for a live-streamed service of Choral Evensong for the Feast of Christ the King.

The St. Alban’s Chamber Choir, directed by Eugene Lavery, will sing Peter Nardone's Preces & Responses and Herbert Howells' Collegium Regale Canticles. The St. Alban's Choristers will sing George Dyson's setting of the George Herbert text "Let all the world in every corner sing" as the anthem. 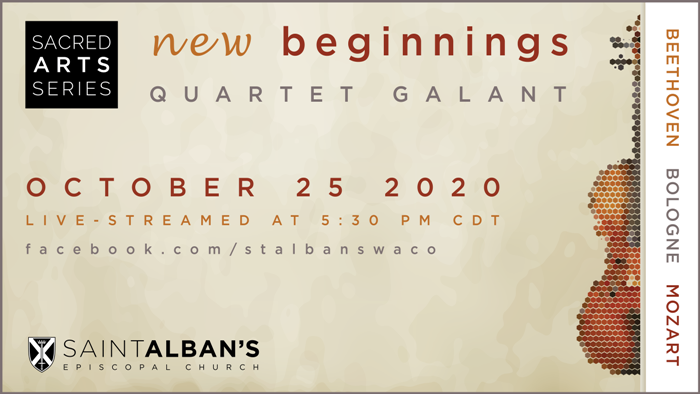 Formed in 2013, Quartet Galant is a period instrument quartet that specializes in the repertoire of composers from the early classical to the romantic period. Armed with gut strings and period bows, the quartet has played concerts featuring the music of Haydn, Mozart, and their contemporaries, early Czech and Moravian composers, and Spanish music. Their debut concert was received with rave reviews, “All four players demonstrated sure technique and mastery of their instruments. Best yet, they enjoyed playing the concert as much as we enjoyed listening to it.” (Theater Jones). Educated at many fine schools throughout the world including The Juilliard School, Peabody Conservatory, Yong Siew Toh Conservatory in Singapore, and the University of North Texas, and having performed in chamber music concerts across the US, Europe, Asia, and South America, the members of Quartet Galant bring to every performance experience a fresh and vibrant concert experience. 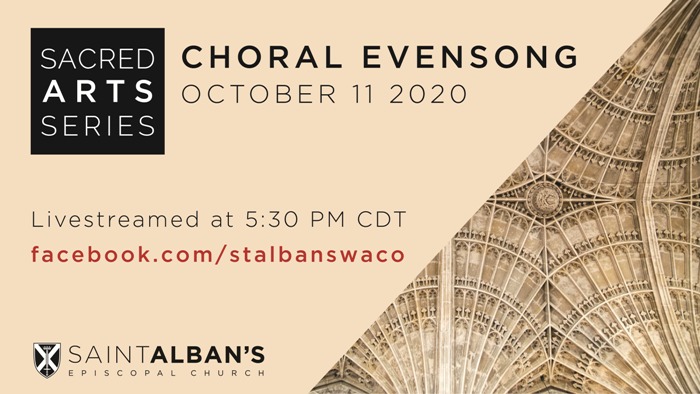 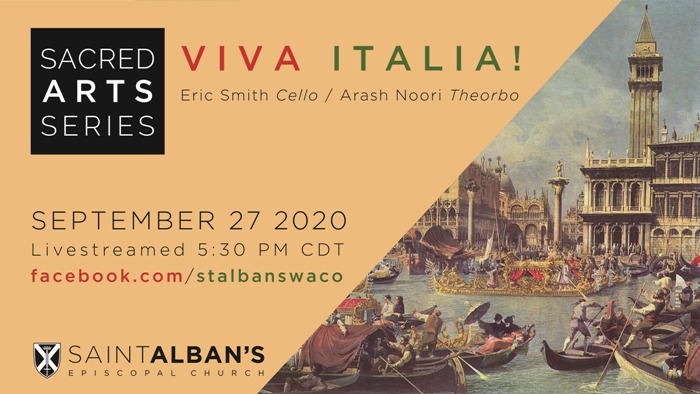 Join St. Alban's on Sunday, September 27, at 5:30 PM on Facebook Live and YouTube for Viva Italia! Dallas-based musicians Eric Smith (baroque cello) and Arash Noori (theorbo) will take us on a journey through music of the Italian baroque period. 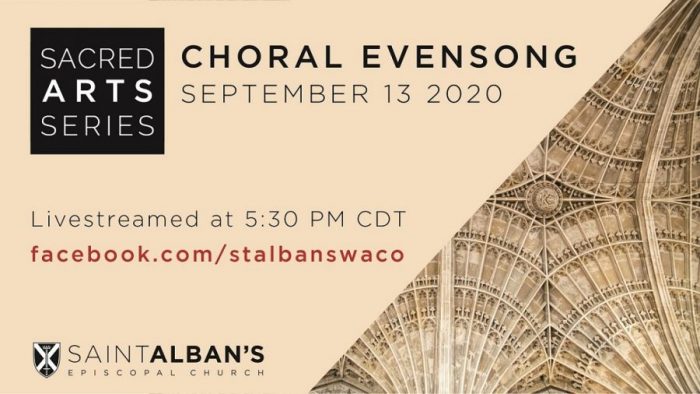 Join St. Alban's on Sunday, September 13, at 5:30 PM on Facebook Live and YouTube for a livestreamed service of Choral Evensong to launch the 2020/21 Sacred Arts Series. The St. Alban's Chamber Choir, under the direction of Eugene Lavery, will sing Richard Ayleward’s Preces and Reponses, George Dyson’s Evening Service in C minor, and David Hogan’s O gracious light. The closing organ voluntary will be Johann Sebastian Bach's iconic Prelude in E-flat major (BWV 552i)